In this series of posts, we’re going to dive into the topic of momentum. We’ll walk through some intuition about momentum, define it in quantitative terms, look at ways we can apply the concept in trading, and finish out with an example momentum-based strategy.

In this post, we’ll lay some groundwork by getting into the core concepts and rationale for momentum.

Let’s work our way into momentum as a concept by thinking through some basic real world examples. In natural terms, momentum essentially means movement with force. A speeding train has momentum for example – lots of mass moving at high velocity.

It translates well as an analogy too: competitors “build momentum” in a game by scoring several in a row and keeping the opposition on the defensive, or you might “get momentum” in a project at work as you knock out key milestones on the way to completion.

In each case, momentum implies a sense of movement plus continuation. Once the hard-to-move thing is moving, well, it should have the tendency to keep going.

This concept translates into markets as well. The concept of momentum in markets is the idea that price is likely to continue in the direction it’s been going, especially if it has gone far, fast, or consistently in that direction.

What’s interesting is that this phenomenon can show up on very different time frames. It can be measured on time scales from microseconds to months, or even years. In a lot of ways, momentum relates to trend following concepts. After all, what is a trend except a continuation of movement?

That said, it isn’t just trend following and does have a character of its own. Here’s an example of what momentum can look like: 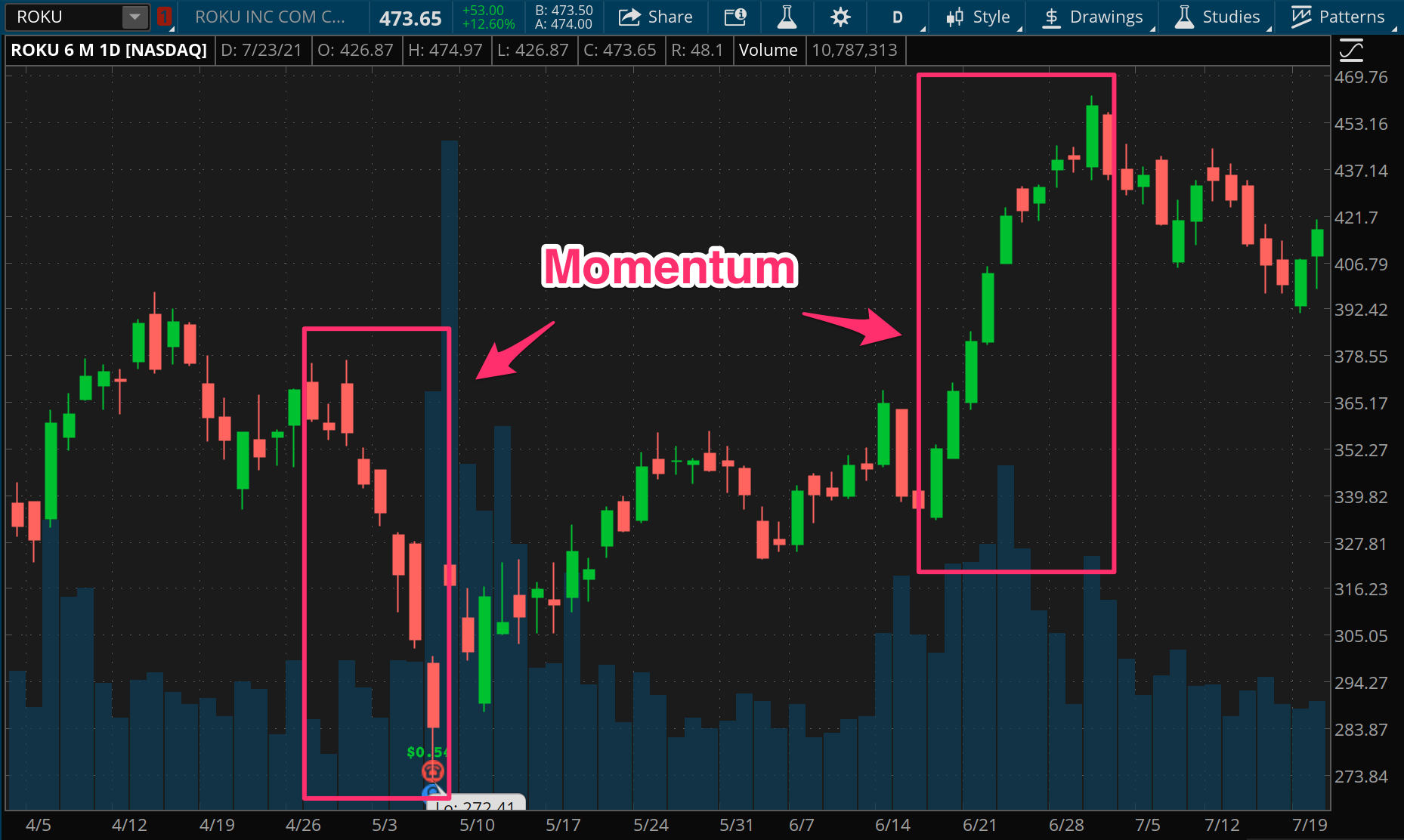 Later in the series, we’ll dig into measuring momentum, and incorporate those elements of speed, distance, and consistency. We’ll also tie those measures back to some of the concepts we covered in the series on volatility, such as volatility breakouts and expansion.

For now though, let’s build some intuition around momentum by considering why it exists in the markets.

Ok, take a step back and just think through this a bit. To reiterate, the idea here is that price movement can, under the right conditions, predict continued movement in the same direction. What would make this possible?

The answer goes straight to the core of markets: price discovery. Price discovery is a constant and dynamic process of participants coming together in a market to reach consensus, searching for an equilibrium between buyers and sellers. When that equilibrium is found, price stays around in a range as participants wait for new information (or else get tired of waiting).

Of course since the world is always changing, this process doesn’t stop. Equilibrium breaks and the search continues. Information, sentiment, and positioning have cascading effects across participants, which show up in the price action. That cascading feature is the cornerstone of momentum.

By no means is sentiment the only reason momentum exists. There are a number of structural causes for momentum as well, like gamma hedging by options market makers, or futures prices moving towards the spot price as the contract nears expiration. 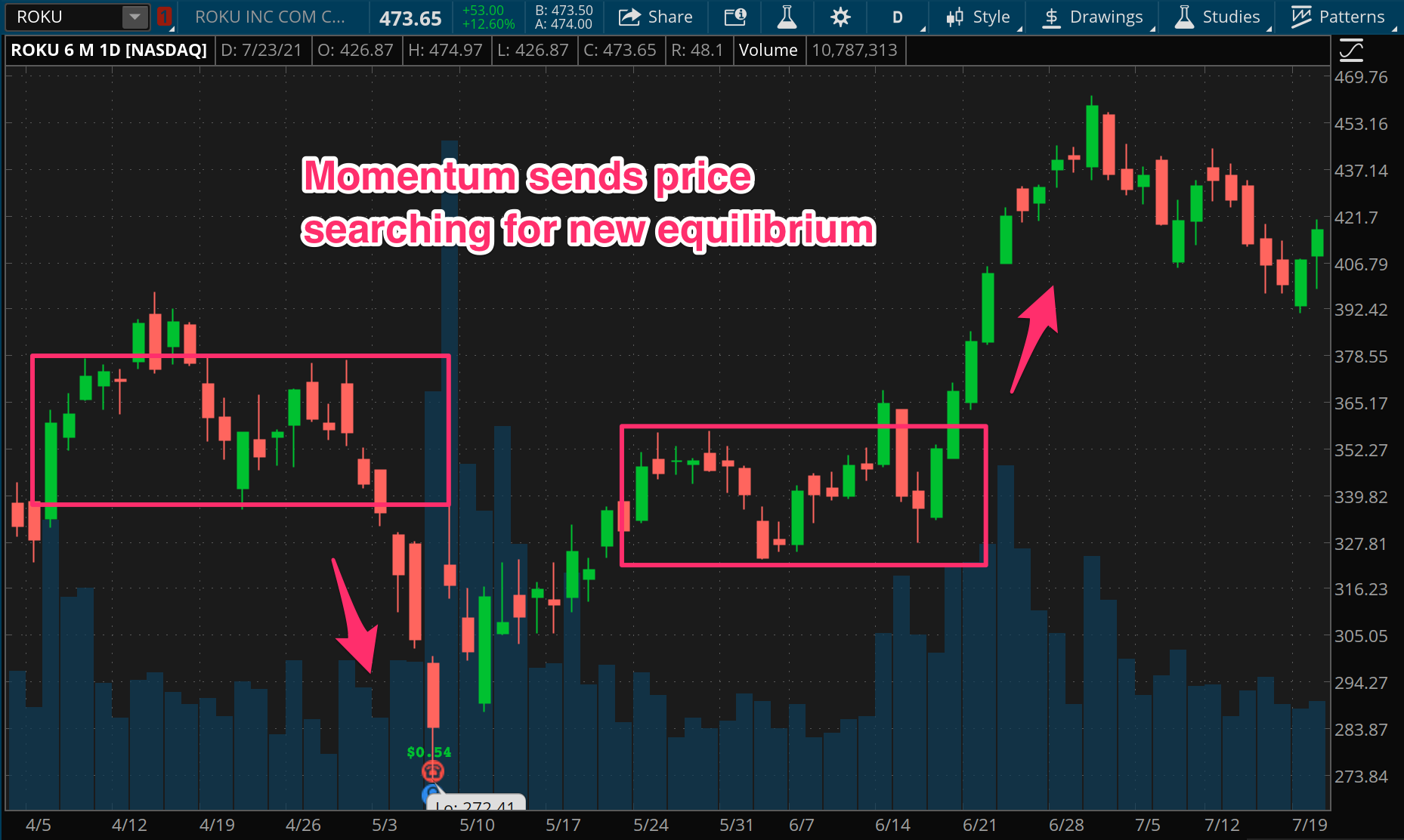 That feedback loop of reactions shows up in price as momentum, and can be measured as correlations between movement that just occurred and continuation of that movement. If we can capture that quantitatively, we can capture a predictive edge.

Technically, this idea of correlation between previous price and future price is called autocorrelation, and a number of classic academics are gleefully convinced that it doesn't exist. These would be the same people who believe in efficient market hypthosis, so take that for what it's worth. Ultimately, we're here to be pragmatic and empirical. If we can find an edge here, then academic theory be damned.

In the next post in this series, we’ll dig into some different measures of momentum and show how we can piece them together into a model for finding edges. In particular, we’ll take this idea of correlation and start adding some inputs around price “speed” (i.e. volatility expansion), total movement, consistency of movement, and rate of change. Eventually we’ll put some of these measures into a simple model and code it up to see the strategy in action. Stay tuned.

If you believe in open source and free content when it comes to trading, you can power that purpose forward here, by helping me do it.